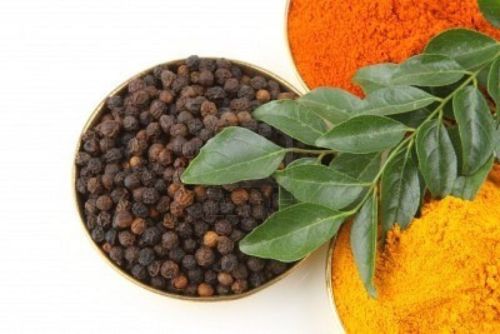 Turmeric and black pepper make a powerful duo. Most of you have heard of the incredible benefits of turmeric and it’s properties. Turmeric is known to actually outperform many pharmaceutical drugs for various diseases? Black pepper contains piperine, a chemical with powerful antioxidant properties. Pepper and turmeric together inhibit the growth of abnormal cells without destroying healthy cells.
When people eat a considerable amount of turmeric, within an hour, there’s a slight increase of curcumin in the blood, but the liver actually tries to get rid of it. When taken with a small amount of black pepper, the curcumin levels skyrocket. Reports range from a 200% increase to over 2,000%!

Cinnamon is high in a substance with powerful medicinal properties, it is a spice that is made from the inner bark of trees called Cinnamomum.
Cinnamon contains large amounts of highly potent polyphenol antioxidants and has anti-inflammatory properties. Cinnamon can maybe improve some key risk factors for heart disease, including cholesterol, triglycerides and blood pressure? It has been shown to both reduce fasting blood sugar levels, having a potent anti-diabetic effect at 1 to 6 grams per day. Cinnamon has been widely studied for its potential use in abnormal cell prevention and treatment.
Cinnamaldehyde has antifungal and antibacterial properties, which may reduce infections and help fight tooth decay and bad breath.

Dosage: 2 capsules a day with food.