N-acetyl cysteine (NAC) is a form of the amino acid, L-cysteine.  NAC has been in use as a supplement for decades for a wide variety of health conditions. There are multiple ways in which NAC benefits the brain and body. In clinical trials, supplementation with NAC is effective for treatment of a variety of health problems. Before looking at the multitude of health conditions that NAC benefits, however, it is useful to understand the 3 primary ways in which NAC exerts it actions:

Glutathione is the primary antioxidant in the lungs. Because of NAC’s ability to break up mucous and its powerful antioxidant effects in terms of boosting glutathione, NAC has been studied as a natural remedy for lung and respiratory conditions like COPD, bronchitis, the flu, and more.

In addition to being of paramount importance in maintaining healthy lung tissue, glutathione is the principle antioxidant in the brain. NAC is also, as you learned above, able to modulate levels of the important neurotransmitter glutamate in the brain. Both glutathione depletion and abnormal glutamate neurotransmission have been found in a number of mental health conditions and nervous system disorders, including bipolar disorder, schizophrenia, obsessive-compulsive disorder, pathological gambling, and cocaine dependence.

One capsule twice a day with a meal. 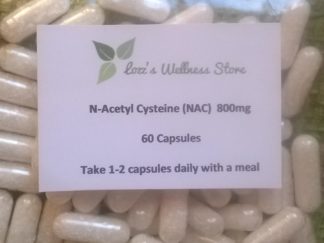