Do you suffer from insomnia or just sick and tired of not getting a decent night’s sleep? Did you know that there’s an herb that has been used to ease insomnia, anxiety and nervous restlessness since the second century A.D.? This natural and herbal sleep aid is called valerian root.

Valerian root is widely used and respected by the general population and physicians for its sedative effects and anti-anxiety capabilities.

You may have even had valerian root before and not even realized it. It’s very common for valerian root to be included in sleep-promoting tea blends, but it doesn’t just offer a solid night’s sleep — it’s also amazing at naturally calming anxiety and can even lower blood pressure, among other tremendous benefits.

Studies show that valerian reduces the time it takes to fall asleep and improves the quality of sleep, so if you can’t sleep, it may be just what you’re looking for. Unlike many prescription sleeping pills, valerian has fewer side effects and is a lot less likely to result in morning drowsiness.

In one double-blind study conducted by the Foellinge Health Center in Sweden, the effects of valerian on poor sleep were significant. Of the study participants, 44 percent reported perfect sleep while 89 percent reported improved sleep when taking valerian root. In addition, no side effects were observed for this group.

In one study of children with minor sleep problems published in Phytomedicine, 81 percent of those who took an herbal combination of valerian and lemon balm reported sleeping much better than those who took a placebo.

Why can valerian root help you sleep so well? Valerian extract can cause sedation is by increasing your brain’s GABA level. GABA is an inhibitory neurotransmitter, and in large enough quantities it can cause a sedative effect.

Results from an in vitro study suggest that valerian extract may cause GABA to be released from brain nerve endings and then block GABA from being taken back into nerve cells. In addition, valerian’s valerenic acid inhibits an enzyme that destroys GABA, another way that valerian can improve your GABA levels and promote a great night’s rest.

Scientists have found that valerian root increases the amount of a chemical called gamma aminobutyric acid (GABA) in the brain. GABA helps regulate nerve cells and calms anxiety. Drugs such as alprazolam (Xanax) and diazepam (Valium) also work by increasing the amount of GABA in the brain. The valerenic acid and valerenol contained in valerian root extract act as anti-anxiety agents.

It’s pretty amazing that a herbal remedy like valerian root can have the same anti-anxiety effects of prescription drugs without all the serious side effects of psychotropic drugs.

High blood pressure is something you definitely want to avoid since it increases the chance of stroke and heart attack. Valerian root supplements can help naturally reduce blood pressure and keep it at a healthy level, which has a direct positive impact on your heart health.

The relaxing nature of valerian root can make it a smart choice for natural relief of menstrual cramps. It can reduce the severity and discomfort of menstrual cramps, which is a common problem for women who suffer monthly from PMS.

How exactly can valerian root help? It’s a natural sedative and antispasmodic, which means it suppresses muscle spasms and acts as a natural muscle relaxer. Valerian root can effectively calm the severe uterine muscle contractions that cause the terrible pain many women experience during menstruation, as a double-blind, randomized, placebl-controlled study from Islamic Azad University in Iran showed.

By reducing anxiety and improving the length and quality of sleep, valerian root can significantly help with daily stress management. Chronic stress can make you feel anxious, but anxiety can also make you feel more stressed out.

By improving GABA levels, valerian makes it easier for both the mind and body to relax. Since relaxation is the antithesis of stress, valerian root is an excellent natural way to help keep your stress down and your quality of life up.

Further, valerian root has been shown to suppress both physical and psychological stress, according to research in BMC Complementary and Alternative Medicine.

For insomnia, it may be taken one to two hours before bed or up to three times in the course of the day, with the last dose near bedtime.

Dosage: 1 capsule a couple of hours before bedtime. 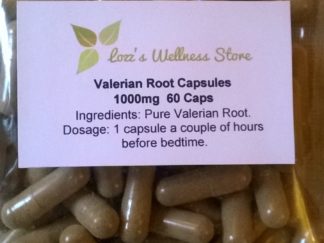