While it’s been used for thousands of years, birch polypore shot to fame when it was found along with the body of ‘Ötzi’, a 5300 year old mummy discovered by two German tourists hiking in the Alps between the borders of Austria and Italy. It’s believed that Ötzi – who was suffering from Lyme disease – might have used the mushrooms to help clear parasitic worms from the stomach and the digestive system.

One of its most important health benefits is boosting the immune system. This is particularly important because a body with a strong immune system does not suffer ill health easily. The fungus also boasts antiseptic properties. It prevents infections when used as bandage. In fact, some testimonies by people who have used it are interesting and fascinating. Users have said that not only does the mushroom heal the wound, but that it also leaves no scar even when the wound was deep.

Chaga mushrooms are especially high in a compound called super-oxide dismutase (SOD), this is an enzyme which reduces the damage done to cells by “super-oxide”, the most common free radical in the body. Studies have shown that SOD acts as an antioxidant and anti-inflammatory, with researchers now investigating the potential of it as an anti-aging treatment as it is known that, as we age, SOD levels drop whilst free radicals increase. Super-oxide dismutase also aids the body in using zinc, copper and manganese. Naturally synthesised and with a biological power unmatched, Chaga provides SOD in a highly bioavailable form which we can utilise either topically or internally.

Along with most other medicinal mushrooms, Chaga is rich in beta-glucans – one of the most potent and healing polysaccharides known. It is renowned for its role in in activating the immune system and reducing the blood sugar of people who have abnormal blood sugar peaks.

These powerful fungi are one of the most alkaline foods on earth due to their dense mineral content: Calcium, cesium, iron, magnesium, phosphorus, potassium, rubidium, silicon and sulphur and extremely high in zinc. It is thought that many diseases are unable to flourish in an alkaline environment.

Chaga is highly regarded as an adaptogen – adaptogens are a unique group of phytonutrients which help your body adjust to stressful circumstances ranging from extreme heat or cold to infections or trauma.

Take one dropper full twice a day to boost immunity. 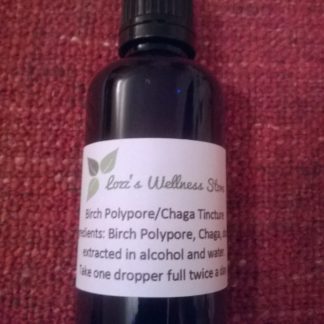