Himalayan salt is a marvellous dietary supplement. It is rich in trace minerals and is mined from underground seams of salt deposits in the unpolluted foothills of the Himalayan mountains.

Good salt is a vitally important nutrient for the body. In recent years there has been a significant drive to get people to reduce salt consumption. However that applies specifically to processed salt which is devoid of trace minerals and lacks vital life force which you get with Himalayan salt. Its pink colour is due to its mineral content.

Many trace minerals are only needed by the body in minute amounts and Himalayan salt gives a wide spectrum of minerals… 84 in fact. These trace minerals are necessary for cellular health. Cellular health is largely a bioelectrical phenomenon . Drinking plenty of good quality water combined with Himalayan salt provides a great alkalizing foundation for health at cellular level.

A good way to use Himalayan salt is to make a brine solution which you then add to water and drink. To make a brine solution take a glass jar (not plastic) and fill 2/3rds with Himalayan salt crystals. Then fill the jar with filtered water. Leave the jar for 24 hours by which time the water in the jar will have become fully saturated with salt. Then each morning add a teaspoon of this brine solution to a glass of water and drink. This is a great way to start the day. It is very alkalizing and a concentrated form of electrical energy for the body. Once you have used half of the jar of brine solution, dispose of the remainder and restart the process for maximum effectiveness.

Himalayan Pink Salt in the Kitchen. Himalayan salt is the best type of salt to use for culinary purposes. Its moderate flavour helps to bring out the flavour in foods in a very subtle way. In addition to being available in fine crystals it is also available in 5mm granular form for use in salt grinders.

Himalayan Pink Salt as a detoxifier in your bath. Add 300gms of Himalayan salt to a bath to aid detoxification. The salt helps the muscles to relax and helps the skin to rejuvenate and eliminate toxins. It is a particularly good detoxifier if your body is under stress. 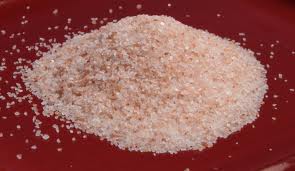