Sitting alongside apple cider vinegar in our cupboard of clever home remedies is hydrogen peroxide, an all-natural, safe, environmentally friendly and super cheap solution. Hydrogen Peroxide is simply water with an extra oxygen molecule (H2O2) and breaks down into oxygen and water. H2O2 is produced by both animal and plant cells and is formed naturally in the environment by sunlight acting on water. Here are 10 uses for hydrogen peroxide …

1. As a mouthwash and teeth whitener:
A tablespoon of 3% hydrogen peroxide solution in a cup of water can be used as a mouthwash. Swish for up to 60 seconds once a day; but don’t swallow and be sure to rinse your mouth out afterwards. This can also help whiten teeth. You can also dip your toothbrush in 3% hydrogen peroxide and brush your teeth with it. Dipping your toothbrush in the stuff will also help to kill bacteria on the brush.

3. As a household cleaner:
Apply the 3% solution to a rag to clean bench tops and cutting boards and help kill salmonella and other bacteria. Half fill a spray bottle with 3% solution and then top it up with water for use as a bathroom and toilet disinfectant and cleaner. Mix 3% hydrogen peroxide with two parts water in a spray bottle and use on areas affected by mould. You can try a neat 3% solution for areas like bathroom tiling, but be careful on the strength in relation to painted items as it may bleach them.

4. To lighten your hair:
Comb 3% hydrogen peroxide through hair after washing it, it will take on a natural blonde hue. Just be sure to condition your hair often so that it doesn’t dry out too much.

5. To combat colds and flues:
Fill the cap of a bottle of hydrogen peroxide with the liquid, lie down on your side, and pour it into one ear. After a few seconds, the liquid will bubble. Lay with the peroxide fizzing for 5 or 10 minutes, and then shake the peroxide out. Repeat on the other ear. You should experience results within 12-14 hours.

6. To clean wounds:
Use 3% hydrogen peroxide to sterilise cuts and abrasions. The solution will start to fizz, but this is normal apparently.

8. To grow better houseplants:
Mix up an ounce of hydrogen peroxide into a cup of water and spray the solution on to your houseplants. It will help them to grow greener and more lush. 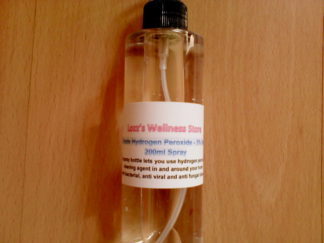