Hawthorn Berries are the herbal extract of all the very best elements of the Hawthorn Bush. Known more traditionally as the Crataegus species, the wide-ranging benefits of this ancient flora have long been known, with both ancient Chinese and Japanese cultures embracing its healing powers. The Chinese actually used it as a digestive aid known as Shan Zha, long before they became aware of its cardio-restorative qualities.

Nowadays the phytochemicals in Hawthorn Berries are widely acknowledged for their many uses in the treatment of cardiovascular disease. Packed with Antioxidant Flavonoids they work by actually improving the amount of blood pumped out of the heart during its contractions.

This combative wonder berry has even been noted for its ability to lower the accumulation of fats in the liver and aorta.

What are Hawthorn Berries used for?

Hawthorn Berries have been cited as being effective in the treatment of angina, high blood pressure and congestive heart failure to name but a few. The Antioxidant Flavonoids not only help by pumping blood out of the heart, they also help with numerous other problems with the cardiovascular system:

By relaxing the blood vessels, Hawthorn Berries have even been used as an all-natural alternative to Beta-Blockers, delivering lower blood pressure with none of the groggy side effects.

Dosage: As a dietary supplement, take one capsule two times per day with water and food. 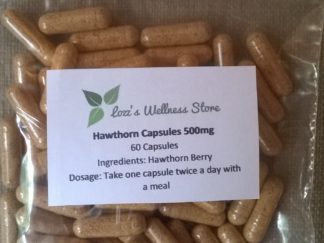