We now have available a complete kit which includes these three herbs and this works out cheaper than buying the ingredients separately.

This is a protocol for cleansing parasites and worms out of the body.

Black walnut hull extract is made by harvesting the green hulls which surround the nut of the black walnut tree.

These green hulls are stripped from the nuts and cleaned. Then they are broken down into smaller parts and soaked in a solution of organic grain alcohol and distilled water.

Some of the natural chemicals do not dissolve in water and hence the reason the alcohol is used. This is a very common ingredient in the manufacture of liquid herbal remedies and it is taken is tiny amounts which are negligible.

Black walnut hull extract has been used for many hundreds of years to help control and eliminate parasites from the body. It can be bought separately or with the two other anti parasite herbs clove and wormwood.

Black Walnut has also been used to aid digestion, act as a mild laxative, help heal mouth and sore throat, and to cleanse the body of various parasites.

It is also known to be good for fungal infections, herpes, poison ivy, and warts. It also may help lower cholesterol and blood pressure.

Many people have parasites
More and more people are concerned these days about the presence of intestinal parasites and worms in the body.   According to numerous studies, nearly 85% of Americans and peoples of “civilised” countries have parasites of one kind or another in their bodies.

Some researchers believe the number is closer to 100%.

Due to the vast number of illnesses implicating parasites as the cause, a regular natural detoxification program including an anti-parasite formula and colon cleanser to promote proper elimination has been recommended by various naturopaths.

Wormwood has been used for hundreds of years as a natural treatment against these invaders.

It is also commonly used with Black Walnut Hull extract and Clove to form a complete natural anti parasite course.

It has been used throughout history as a vermifuge. A vermifuge is a substance able to destroy or expel intestinal worms).

Wormwood is also highly valued, especially for its tonic effect on the liver, gallbladder and digestive system.

It increases stomach acid naturally, improving digestion and the absorption of nutrients. It also eases wind and bloating and, if taken regularly, can help the body return to full vitality after a prolonged illness.

Wormwood has been shown to help increase bile production in the body and more than one theory suggests that it is this increased bile production as well as the herb itself which helps eliminate some worms.

Wormwood only kills harmful parasites. Please do not confuse these harmful parasites with normal healthy bacteria called “Intestinal Flora”. These good bacteria help to digest food and eliminate waste. They are in fact a very necessary part of the human digestive system.

Many modern processed foods, drugs, chlorinated water and chemicals can kill off many of these good bacteria. As well as upsetting the digestive balance, this can allow parasites to thrive in the absence of normal intestinal flora.

Maintain a healthy diet whilst on a parasite cleanse, the more healthy your diet the better. In truth the same applies after as well. Try to eat a diet with lots of fresh vegetables, particularly greens, carrots and other root vegetables. Our special formulation of Superfood is also particularly effective.

3 reviews for Parasite Cleanse Pack *Save £2!* 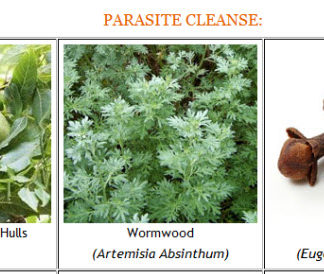