Elderberry has a very long history in herbal medicine as a cure for colds, coughs and flus. Elderberry tincture, capsules or dried powdered are often taken along with several other herbs when a cold or flu threatens. According to the National Center for Complimentary and Alternative Medicine, the European elder is most commonly used for supplements. It’s also the elderberry tincture most frequently studied for its effect on cold and flu viruses.The most common uses for elderberry tincture include treatment for:

Promising scientific research has begun on the use of elderberry tincture to shorten the duration and severity of colds and flus, but no reliable conclusions may be drawn from the preliminary studies. Scientists from Hebrew University – Hadassah Medical School in Jerusalem conducted a study in which 60 men and women who were suffering with the flu took either elderberry tincture or a placebo. Those who took the elderberry got better faster, on average about twice as fast as those who received the placebo. They also used fewer pain medications such as aspirin and other medications to control flu symptoms.

Unless you have a known allergy to elderberry, simply consult your doctor to ensure no potential drug interactions or other negative impacts on your health before using elderberry tincture. The only known potential side effect of elderberry is that it acts as a diuretic, so if you are taking diuretics or have bladder or kidney problems, discuss using elderberry with your physician before taking this herbal remedy.

If you think that a cold or flu is about to take over, using an elderberry tincture can kick it before it gets too bad. Take one teaspoon of the tincture three times per day. You can dilute a tincture in water or juice to help with the flavour.

There are no reviews yet.

Be the first to review “Elderberry Tincture 1:3 50ml” Cancel reply 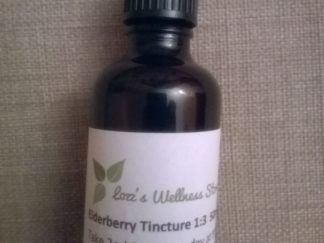